Larung Gar Buddhist Academy, also known as Serthar Buddhist Institute, sits in the Larung Valley at an elevation of 4,000 meters, about 15 km from the town Sêrtar, in Sertar County, Garze Prefecture in the traditional Tibetan region of Kham. The academy was founded in 1980 in an entirely uninhabited valley by Jigme Phuntsok, an influential lama of the Nyingma tradition. Despite its remote location, Larung Gar grew from a handful of disciples to be one of the largest and most influential centers for the study of Tibetan Buddhism in the world. Today it is home to over 40,000 monks, nuns and lay-students.

The campus of Larung Gar is enormous. Houses for monks and nuns sprawl all over the valley and up the surrounding mountains. A huge wall through the middle of Larung Gar separates the monk side from the nun side. Monks and nuns are not allowed out of their designated areas except in front of the main monastery assembly hall which is common to both nuns and monks. The houses are all built in a wood style that is traditionally found in this region, and built so close together that they appear almost on top of each other.

One of the most surprising elements of Serthar is that more than half of those who come to study are women.  Entry into the relatively small number of nunneries that exist in other areas of Tibet is limited, but Serthar was open to virtually anyone who genuinely sought to become a student of Khenpo Jigme Phuntsok’s ecumenical vision. Another surprise at Serthar is that it attracts ethnic Chinese students as well as students from Taiwan, Hong Kong, Singapore, and Malaysia, who attend separate classes taught in Mandarin, while larger classes are taught in Tibetan. 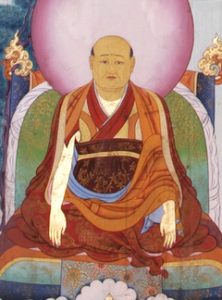 By Lama Jigmé Namgyal (with translation from Tibetan into English by Dr. Dylan Esler) If we wish to lead a life that is fulfilling and successful, and even more so if we seek to go[...]
Voir le calendrier